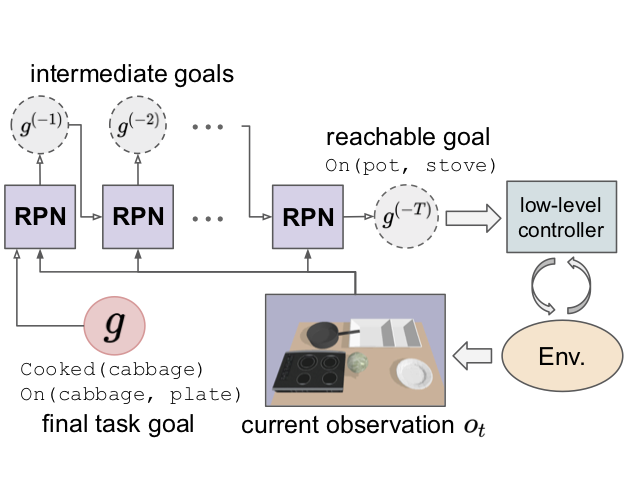 Recent learning-to-plan methods have shown promising results on planning directly from observation space. Yet, their ability to plan for long-horizon tasks is limited by the accuracy of the prediction model. On the other hand, classical symbolic planners show remarkable capabilities in solving long-horizon tasks, but they require predefined symbolic rules and symbolic states, restricting their real-world applicability. In this work, we combine the benefits of these two paradigms and propose a learning-to-plan method that can directly generate a long-term symbolic plan conditioned on high-dimensional observations. We borrow the idea of regression (backward) planning from classical planning literature and introduce Regression Planning Networks (RPN), a neural network architecture that plans backward starting at a task goal and generates a sequence of intermediate goals that reaches the current observation. We show that our model not only inherits many favorable traits from symbolic planning –including the ability to solve previously unseen tasks– but also can learn from visual inputs in an end-to-end manner. We evaluate the capabilities of RPN in a grid world environment and a simulated 3D kitchen environment featuring complex visual scenes and long task horizon, and show that it achieves near-optimal performance in completely new task instances.